With the changes to the Washington State medical cannabis laws and the effective elimination of the medical cannabis market, the Washington State legislature and LCB have given qualified patients the opportunity to create Cooperative Gardens with a maximum of 4 patients per garden.  While I, personally, am not a fan of the recent changes, I, as an entrepreneur, felt a need to help patients if I could.
Sometime after the LCB public hearing scheduled for Sept. 7, 2016 at 10:00a in Olympia, WA, Twisted Stick Gardens will offer consultations and growing advice to current and prospective LEGAL cannabis producers. (To be honest, if you wish to grow cannabis without a license or authorization in a State where both are legal, youtube is good for you.)
For those of us who are finding it difficult to find the same type or quality of medication we once had access to at medical dispensaries, growing our own either by ourselves or as a member of a Cooperative may be our only realistic option. As patients, who have legally grown their own medicine for a number of years, the founders of Twisted Stick have decided to offer their experience and expertise to patients in need of assistance.
Exact services to be offered and the prices associated with those services are still being determined. Further information will be released as it becomes available so check back soon.
Posted by Thomas 1750 at 12:35 PM 16 comments:

Washington LCB "Asleep at the Wheel" on Medical Cannabis Database

It's July 1, 2016, the day that I, along with my fellow medical cannabis patients in Washington State, can no longer go to a non-profit medical dispensary to obtain medicine.  Also, the day Senate Bill 5052 assured us we would be able to purchase medicine tax-free at recreational cannabis stores.  To less than my amazement, the database that would allow this ISN'T ready.

Let that sink in for a second if you take medicine on a daily basis. Imagine, the legislature decided they were in jeopardy of losing out on some tax dollars, so for whatever medicine you take: you can't go to wherever you used to get it, the store you can go to has a similar type but not the same, and now you have to pay nearly double the cost because you're taxed on it.  Anyone mad yet? Now let's say in order to get the amount of medicine you need, you must choose to either, pay the cost of renting a 2 bedroom apartment or risk criminal behavior, or both.  I think most people will agree that neither of those are an acceptable choice.

This November, a vast amount of voters will exercise their rights to choose people to represent their views in government.  If the information above worries you, that the people currently making decisions aren't representing your views, please use that opportunity to choose someone who will.

I for one, cannot, in good conscience, vote for ANY incumbent Washington State Congressperson that voted in favor of Senate Bill 5052.  Unfortunately, Governor Jay Inslee will not be receiving my vote either.  While I do find areas of his leadership commendable, his willingness to allow this type transgression to a bill he signed into law disqualifies him as a person able to effectively represent MY views.
Posted by Thomas 1750 at 2:12 PM 6 comments:

All BHO is not created equal. Some tips on cannabis concentrates.

When it comes to cannabis concentrates, there is a lot to know.

I'll admit to being somewhat confused, at first, as to what each or any of the differences were. From my previous experiences, I had heard of and even seen some of the more common types before they became available at medical access points. I had always called anything of that nature "hash" as I had no real idea how the plant was processed to make the different types.

As I began to understand cannabis as medicine, I quickly found that the active ingredients (cannabinoids, terpenes, etc.) are located mainly in the trichomes.  Further, I learned that removing these trichomes from the other plant material leads to a safer method of inhalation, owing to the lack of tar and other harmful compounds produced by burning.

Enter The DAB(on?). Okay, kinda cheesy Bruce Lee movie reference. Moving on. Dabs, to put it simply, are vaporizing collected trichome material and inhaling it.  In common practice, this is done using butane hash oil or BHO and placing a small "dab" onto a heated surface and inhaling the resulting vapor by means of a pipe created for this purpose.

The result is a large dose of cannabinoids and terpenes quickly absorbed into the system.  Depending on the amount of THC in the dab and the tolerance of the user, the effects can be quite powerful. I would certainly not recommend a high THC dab for an inexperienced user as the psychoactive effects can be uncomfortable.  As a medicinal user with a high tolerance and a person who enjoys the psychoactive effects of THC, I strongly suggest a slow approach to using dabs and other concentrates.

Why dab at all?  The best answer is because it's easier on my lungs than smoking flowers/buds.  Another answer is, it's the fastest way to get large and measurable amounts of cannabinoids into my system.  For me, those 2 answers are enough.

Although my list of benefits now outweighs the risks involved, it wasn't always that way.  Especially with BHO, if I don't know who processed it, how much THC it contains, how or IF all of the butane was removed, and what material it was extracted from, I'm not likely to use it.

In Washington State, any of the BHO available at a licensed recreational cannabis store will have been tested for THC levels as well as residual butane and other impurities including pesticides.  That is NOT the case with any of the "black market" products I've seen.

One of the producers I met who had been making oil for medical cannabis patients was kind enough to allow me to observe his process.  I noticed that there were many steps and some specialized equipment involved.  I wouldn't feel comfortable giving a tutorial on what all was done but there were some aspects I can easily relate.

First, it is important that the proper type of butane be used.  The above picture is a brand of specialized "zero impurities" butane referred to as N-tane.  It's worth noting that this isn't available in most stores that sell butane for lighter refilling.

Additionally, after the butane was run through the plant material, it was collected in a container and then placed into a vacuum chamber oven to remove the butane still trapped in the oil.

Since, I've been informed that parts of the process I saw have been changed to comply with new laws.  I imagine this makes the process more complicated and or involves other specialized equipment.  I have also seen youtube videos and heard horror stories that make this a "Don't Try This At Home" activity.

To sum up.  Cannabis is a great medicine.  Cannabis concentrates are a great way to use that medicine without some of the negative side effects.  BHO is a reasonably safe product, IF it's made by someone who knows what they're doing.  Buying BHO at a recreational cannabis store is probably the most safe way of getting it.

I love cannabis, I like dabs, I think both kinda have gotten a bad rap.  I hope information and careful, responsible use can lead to a bit less misunderstanding of a wonderful plant.
Posted by Thomas 1750 at 2:30 PM 39 comments: 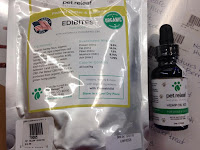 One of my friends at Bothell Feed Center, sent me this pic of some products they carry.  These are cannabidiol or CBD infused supplements for Pets.  I, personally, have only heard good things about these products.  They don't contain any THC, the psychoactive compound found in many cannabis strains.  These are derived from commercial hemp plants that contain very little if any THC to begin with.  As THC can be toxic to dogs, I can understand some pet owners concerns.  Set them aside though because there is zero chance of these products containing any THC.
Why give these to your pet?  Like humans, even you, our pets have endocannabinoid systems. (Google that one if you don't already know about it.)  The short version is, everything with an endocannabinoid system produces CBD, and other cannabinoids, in small amounts to help regulate the body's homeostasis.  Think keeping everything in proper working order, or re-watch Bio-Dome (like you need an excuse right).
Anyhow, some of the supplements that might be replaced or be made to work better by these types of product include:  Glucosamine, Chondroitin, and Fish Oil, just to name a few.  So, if your pet suffers from arthritis or other digestive issues, maybe give these a try.
Posted by Thomas 1750 at 11:30 AM 234 comments:

How to make cannabis infused butter.

One of the questions I get asked quite often has to do with how to make edibles.  For me, the easiest way to make a batch is to 1st make CannaButter.  Not to be confused with budder or wax, CannaButter is simply, butter infused with cannabis essential oil or concentrates.  In this example, I'm using oil but the process is the same if using kief or other concentrated cannabis.

Step 1, decide how much concentrate to put in the butter. Many times, one can't be sure exactly the amount of THC cannabinoids contained in a particular concentrate.  Being a proponent of the "better safe than sorry" school of thought, if you don't know start small.  For this batch, I used approximately 2 grams of oil into 1 stick or 4 Oz. butter.  The oil was about 75% THC, so about 1500 mg of THC went into the butter.


Step 2, melt the butter on medium low heat.  When melted fully, add the concentrate to the butter.  I use setting 4 on my stove, the idea is to keep the butter at about 300-320 Fahrenheit.

Step 3, stir the butter pretty constantly while making sure the temperature stays below 320 degrees.  You will notice the butter bubbling, this is normal.  The butter needs to simmer for 20-25 minutes.  Decarboxylization is a big word and not really a topic for a 101 course.  Activating the THC is a much easier way to think of what's going on.

Congratulations, after the 20-25 min you have successfully created CannaButter.  It really is that easy.  Now, you need to make sure of a couple things. 1st, KEEP YOUR EDIBLES AWAY FROM CHILDREN!  Any child will grab and eat a brownie if they think it's okay, many will eat them even if you tell them they shouldn't.  2nd, even though cannabis is NOT toxic, make sure you use a reasonable amount and weigh out your doses.  This 1500 mg stick of butter was used to make 30, 50 mg cupcakes.  Using the same amount in say 10 large cookies would lead to an uncomfortable dose for most new or low tolerance users.

So, now that you have your CannaButter with activated THC, it's time to bake your edibles.  Remember, terpenes start boiling off below 315 degrees so if possible try to bake or cook at that temperature or below.

Eating cannabis is a great way to experience many of the beneficial qualities of cannabis both medicinally and recreationally.  Keep some peppercorns on hand if anyone starts to feel a little too high as chewing them has been shown to reduce unwanted psychoactive effects.